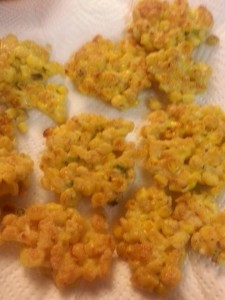 Directions:
1. Using a sharp knife, cut the kernels off of the corn cobs. Place the kernels into a large mixing bowl and add the shallot, scallions and garlic. Stir to mix. Add the egg and the flour and stir again until thoroughly combined. Season to taste with salt and pepper.
2. Place a tablespoon of the oil in a large skillet and bring it over medium heat. Fill a ¼ cup measuring cup about ¾ full with the corn mixture and when the oil is hot dump the measuring cup contents into the oil. Using a spoon or spatula, press down on the pile you just made to flatten into a cake. Repeat three times until you have four cakes in the pan. Cook the fritters for 1-2 minutes until golden on the bottom and then flip and cook for another 1-2 minutes. When the fritters are golden on each side, remove them to a plate covered with a paper towel to drain off any excess oil.
3. Repeat step 2 twice more until you have used all of the corn mixture to make 12 fritters.