Peel and seed 2 gallons of BIG cukes. Cut into 1/2 inch pieces. Put in large container and cover with 2 cups pickling lime dissolved in water to cover the pickles. Let stand 24 hours. Stir occasionally. Next day, wash until water runs clear. Put in clear water overnite. Drain and make a brine of 1 cup vinegar, a small bottle of red food coloring and 1 TBSP alum and water to pour over pickles. Simmer for 3 hours (yes, thats right, 3 hours), then drain. Make a syrup of 24 oz red hots OR 1 # Fireballs, 2 cups of vinegar, 2 cups of water, 8 cups of sugar and 8 cinnamon sticks, broken. Boil and pour over pickles. Let stand overnite. Drain syrup off pickles everyday for 3 days, Heat and pour back over pickles. ON the THIRD morning, put pickles in jars, pour syrup over and boil in water bath for 10 minutes.

IT sounds like a lot of work, but it really isnt that big a deal… and WELL worth it… THESE ARE WONDERFUL color and flavor in the WINTER ! I HAVE MADE THESE LOTS OF TIMES … BUT I WARN YOU… IF you use FIREBALLS, THEY ARE

HOT… to which I like, BUT NOT everyone likes THAT hot a cinnamon flavor, so IF you are one of these people, you would LOVE the red hots better… but if you like cinnamon and apples, THIS is GREAT ! I actually ALLOW some of my pickles to OVER GROW, just so I can get this recipe made ENJOY

-Angie Koon Here is a pic of my cinnamon pickles right before I canned them. Lengthy process but well worth it. I think others call them mock apple rings. Mine made about 15 pints 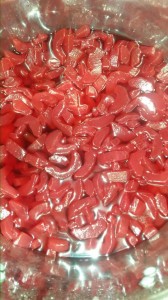