only changes I made were adding more cinnamon

Final product! John and I sat down and had a slice while still warm in the middle… Oh man! It was really good. The icing will make enough to coat the to of the bread and then we dolloped a spoonful of extra on the side of our plates. I used walnuts on top which gave it a nice lil crunch. John immediately had a 2nd piece so its safe to say I did ok ‘ ) 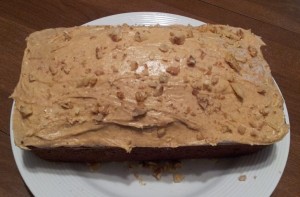 1 teaspoon freshly grated lemon zest (I left this out, too)

1/2 cup chopped, toasted pecans or walnuts, optional (I didn’t add the nuts to the batter, but sprinkled them on top of the frosted loaf instead)

Position your oven rack in the middle of the oven, and preheat oven to 325 degrees. Grease and flour a 9 x 5″ loaf pan; set aside.

Drizzle in the canola oil with beater on medium-low. Reduce speed to low and add the pumpkin puree. Mix until thoroughly combined. Add the dry ingredients in two additions and blend for 10-15 seconds just until incorporated. Fold in the pecans using a rubber spatula.

Spoon the batter into your prepared loaf pan and bake for 60-65 minutes or until a toothpick inserted in center comes out clean. Cool loaf in pan for 10 to 15 minutes, then remove and cool completely on a wire rack.

If you’re going to frost the loaf, you can make the frosting while the loaf is cooling…

2 teaspoons half & half or milk

1/4 to 1/3 cup chopped pecans or walnuts, optional, for sprinkling on top

After frosting the cooled pumpkin loaf, sprinkle with chopped pecans or walnuts if desired.