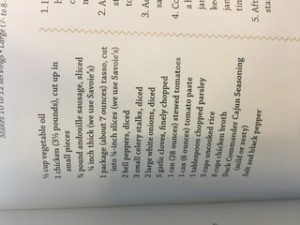 In another bowl I had a chopped onion
5 minced garlic cloves chopped green bell pepper
Chopped red and yellow sweet peppers, corn on the cob broken in halves
Once meat is browned transfer some of the meat to the chicken stock and add the corn

Add a 28 oz can of stewed tomatoes whole, and a 6 oz can of tomato paste
Fill up paste can with water and add that
Salt
Pepper
Cajun Spice
Old Bay Spice
Parsley flakes
Whole stick of butter

Add all together in large pot I used my canning pot
More Spice to taste
4 cups rice (next time is cut it to 3)
Sir every 3 minutes to keep rice from clumping.. cover stir every three minutes for 30 min when rice is tender