Felicia Lisa wrote– I posted the “Simply So Good: Crusty Bread recipe in here a couple days ago (look down a few posts) and promised I’d let everyone know how it went. I had to improvise, but found that I easily made a mock dutch oven by inverting my cast iron frying pan over my cast iron chicken fryer.

FEAST YOUR EYES ON THIS!! Easiest bread I’ve ever made – it has a thick chewy crust on it as good as San Francisco French bread! And.. I was raised in SF so I know this! I would like a tiny bit more sour dough flavor, but if you’re a baker you need to try this once. She has some variations of this with cheese, and other additions that I’ll for sure be trying. I used regular yeast… didn’t even proof the yeast (that’s the part I missed). According to the recipe if you’re not using instant or quick rise yeast you should proof your yeast. Oops.. missed that… I set the bowl near the wood stove last night before going to bed (it’s nice and warm there). And.. with almost no effort…here’s the end product, A wonderfully rustic Artisan like bread! 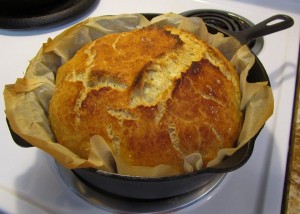 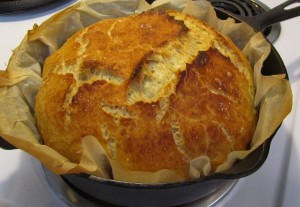 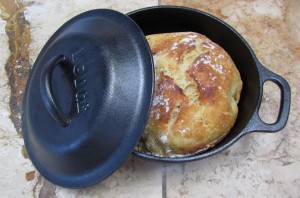 ONE LAST THING.. and I think it’s a great tip. I love to try and keep the crust *crunchy*. If you put the bread in a Ziploc the crust softens. So… this is how I store it (if not freezing it). It’s either on my counter or sitting up in the cupboard on a plate with the cut end down. Keeping the cut side down (flat) works sooo neat. We’ve left it like this for 3 full days..and even the heel is still moist and the crust is still crisp. There are no preservatives in this recipe so after 2-3 days it should be frozen.