I made a few changes, the biggest being I doubled the recipe .. because I had a LOT of bread to use up that was going stale, (some white sandwich bread and some hot dog buns I didn’t want to waste) so I had a lot more bread than was called for the recipe so I doubled the recipe so I could even it all out.. worked out great.. Also I toasted my bread in the oven first like I always do in all my bread pudding recipes so I can have nice fluffy bread pudding not soaked down globs.. I added some white sugar to the bread before I put it under the broiler.. … So the bread pudding part was beautiful and fluffy and would have been a hit, had I not used the nasty nutmeg sauce this recipe calls for. ..my only complaint is I did NOT like the nutmeg sauce recipe from this recipe.. If I ever make this again I will definitely use my mom’s hard sauce.. the nutmeg sauce was not good 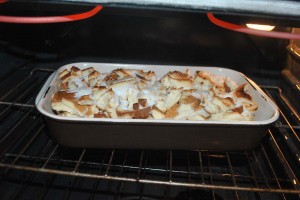 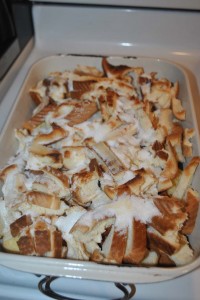 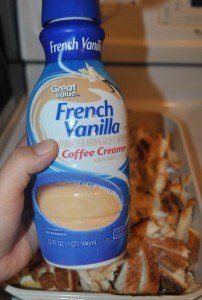 I then sprinkled cinnamon over top the bread

Next I melted my butter ( I used a whole stick ) and I took my six eggs beaten, 1 cup of granulated sugar, 2 tsp vanilla extract

1/2 tsp salt, and we like a lot of raisins so I used about  1/2 cup or more and I mixed all together then poured over top my bread pudding starting at one end and working my way down 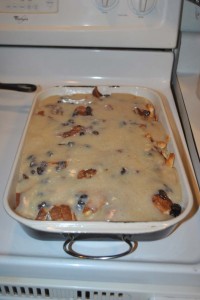 and let it set a little before cutting.. 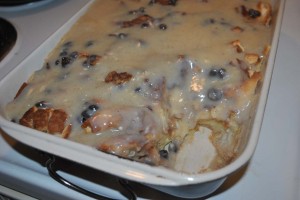 and soon watch it disappear 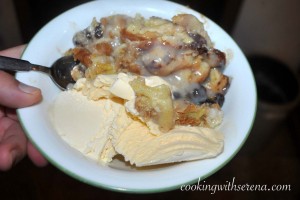 Original Recipe posted below unchanged.. (I doubled it) ..

In small pan combine sugar, cornstarch and nutmeg. Stir in milk and butter. Cook over medium heat until mixture starts to thicken slightly. Add vanilla extract, and stir constantly until thick. Do not boil. Remove from heat and pour over cooled bread pudding.