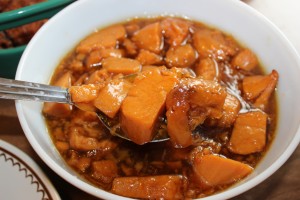 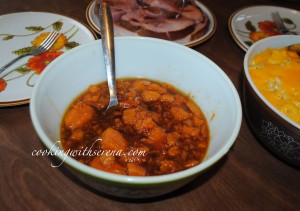 I always go a little confused about what the difference between Yams and Sweet Potatoes were.. I always heard them called the same thing.. Well I did a little research on them and this is what I found on the internet at huffingtonpost.com ..

Canned Yams from the store are Sweet Potatoes! All this time, many Americans have been making the mistake of calling sweet potatoes “yams.” But there’s actually a difference. It turns out sweet potatoes and yams are not even related. They are two different species of root vegetable with very different backgrounds and uses.

So why the confusion? The U.S. government has perpetuated the error of labeling sweet potatoes “yams.” In most cases sweet potatoes are labeled with both terms, which just adds to the confusion. Since there are two types of sweet potatoes, one with creamy white flesh and one with orange, the USDA labels the orange-fleshed ones “yams” to distinguish them from the paler variety. Ok, so that sort of makes sense. But why call the orange-fleshed ones “yams” in the first place? So to understand the difference between yams and sweet potatoes, we have to dig a little deeper (tuber pun intended).

Sweet potatoes (Ipomoea batatas) come in two main varieties here in the States. One has a golden skin with creamy white flesh and a crumbly texture. The other has acopper skin with an orange flesh that is sweet and soft. All sweet potato varieties generally have the same shape and size — they are tapered at the ends and much smaller than the aforementioned yams.

Americans have been calling the orange-fleshed variety of sweet potatoes “yams” since colonial times when Africans saw familiarities in them to the tuberous variety. The USDA decided to label them as “yams” to differentiate the two varieties. Both varieties of sweet potato, including “yams” can be widely found in supermarket.

TRUE Yams (family Dioscoreaceae) are native to Africa and Asia and other tropical regions. Yams are starchy tubers that have an almost black bark-like skin and white, purple or reddish flesh and come in many varieties. The tubers can be as small as regular potatoes or grow upwards of five feet long.

The word yam comes from an African word, which means “to eat.” The yam holds great importance as a foodstuff because it keeps for a long time in storage and is very valuable during the wet season, when food is scarce. For eating, yams are typically peeled, boiled and mashed or dried and ground into a powder that can be cooked into a porridge. Yams can be found in international markets, such as those that specialize in Caribbean foods. 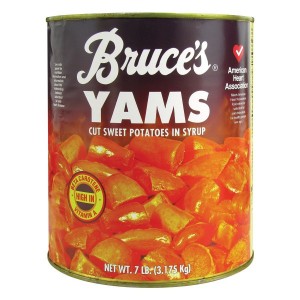 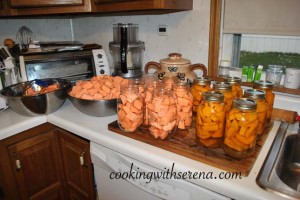 (for the recipe to can your own sweet potatoes click here http://cookingwithserena.com/?p=410016 ) 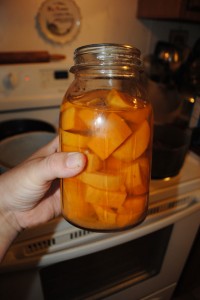 gently strain out the juice..

put the liquid into heavy bottomed medium  to large size sauce pot, remember it will boil so you want it to be deep enough not to boil over 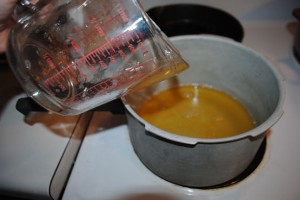 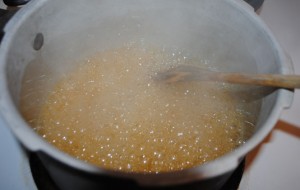 For my quart I  add 1 cup sugar, one cup of brown sugar 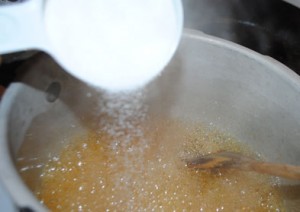 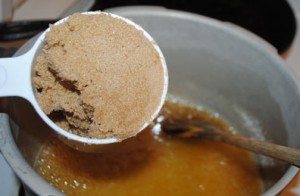 .. bring to boil, let it boil, stirring often.. it will boil and boil and boil till it reduces down into a thick caramelized almost syrup.. stir often with wooden spoon at medium heat as not to scotch your sugars, remember you are making a CANDY glaze 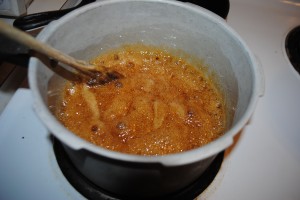 Add 1/4 stick or so of butter and stir bring to boil again the butter does thin it out so you got to bring it back  to the candy consistency if it is watery it is not done.. it should make a hair string almost when you lift the spoon out of the syrup.. 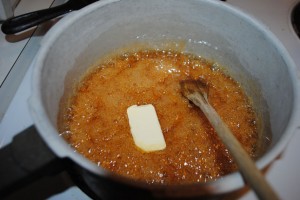 gently add sweet potatoes, do not stir or they will go to mush..gently incorporate into the syrup by spooning over them.. .. 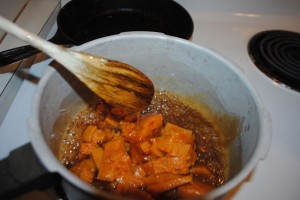 let cool slightly before serving, or will burn your mouth. Carefully transfer to serving dish.. enjoy!!! 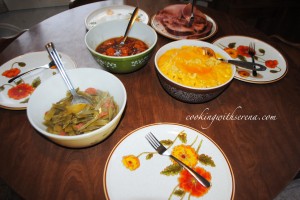